History of the Foundation

April 2016 A collective donation drive between the CURA Victim Fund of the AAF and the Leipzig Rote Stern (Red Star) raises over €40,000. The drive is organized to benefit the residents and business owners of Wolfgang-Heinze-Straße in Leipzig’s Connewitz neighborhood. On January 11th 2016, a mob of right-wing hooligans vandalized numerous cars and storefronts throughout Connewitz. Much of the damage was not fully covered by insurance. 525 donors from throughout Germany helped make the victims of the attack whole. 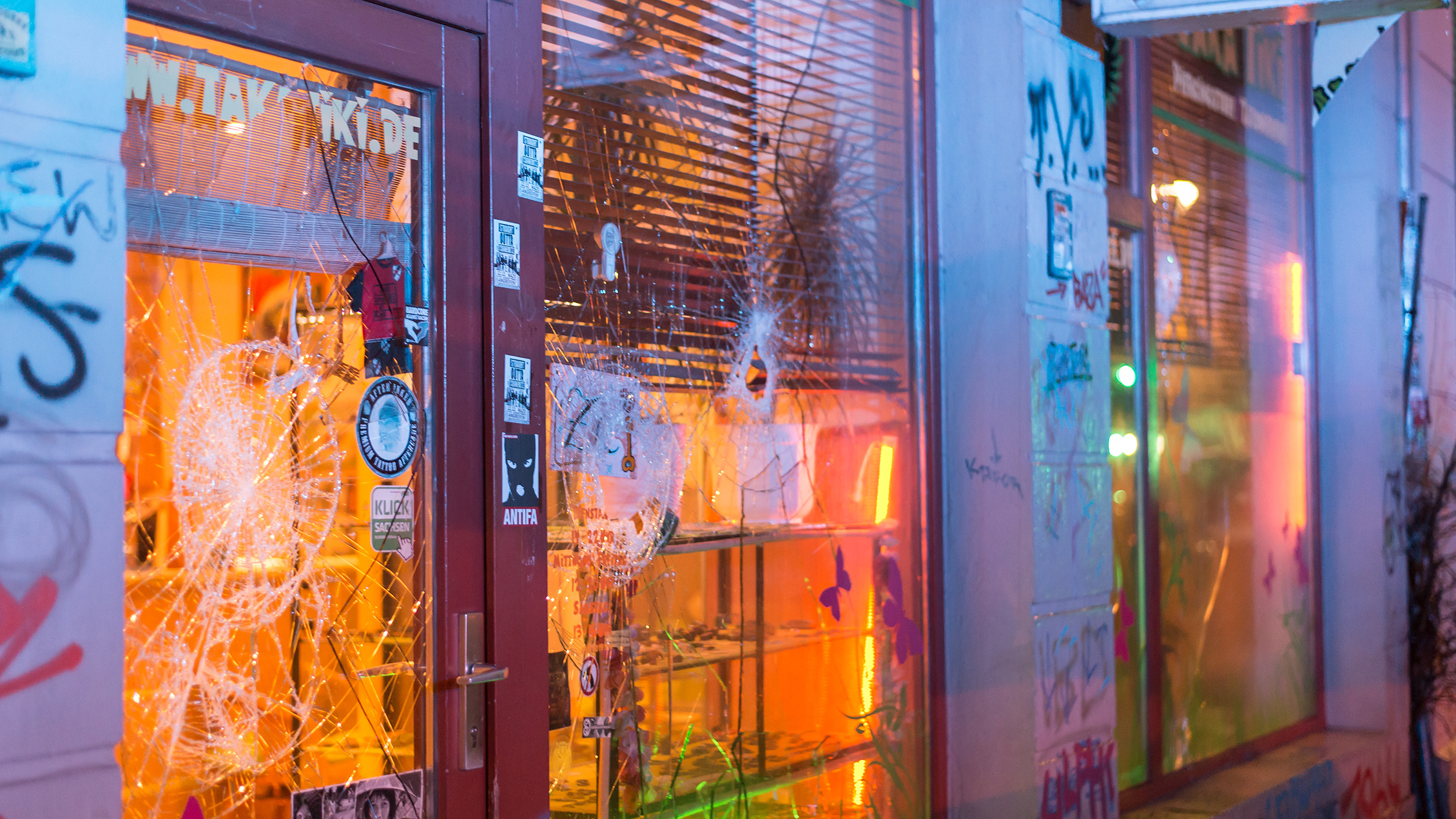 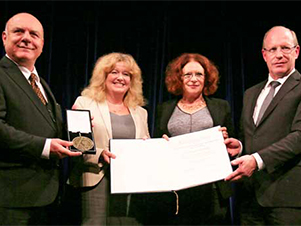 September 2015 The Amadeu Antonio Foundation receives the first annual Joseph-Ben-Issachar-Süßkind-Oppenheimer Award. The award, given out by the Baden-Württemberg state Parliament and the Israelite Religious Community of Württemberg, honors outstanding work against xenophobia and anti-minority hate in academics and journalism.

February 2015 The Amadeu Antonio Foundation founds, together with leading Jewish academics and anti-Semitism experts, the “Network for Research and Combat against Anti-Semitism”—NEBA (Netzwerk zur Erforschung und Bekämpfung des Antisemitismus in German). NEBA is dedicated to keeping political decision-makers informed about new developments in anti-Semitic ideology and sharing research about effective anti-anti-Semitic praxis with the public at large. 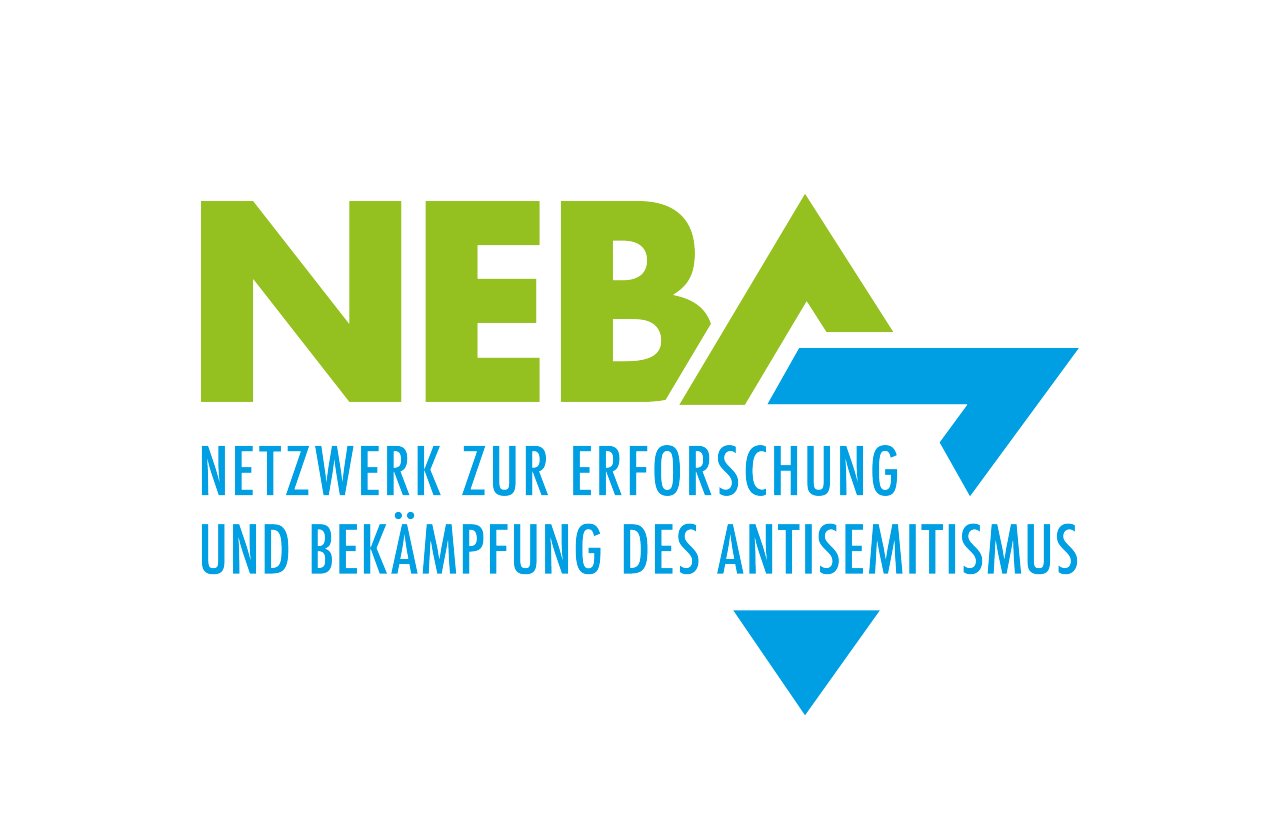 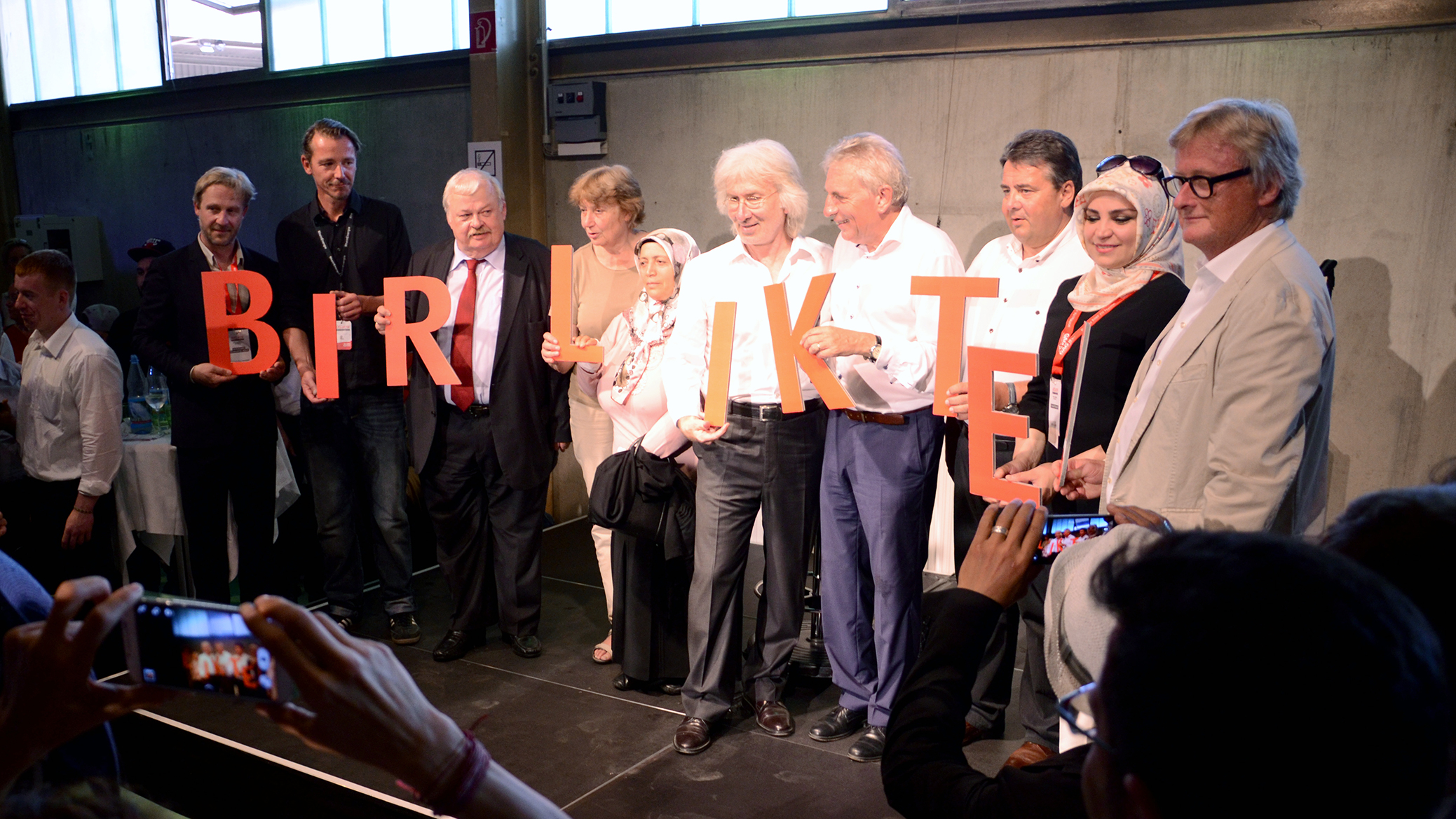 June 2014 On June 9th, 2004, members of the “National-Socialist Underground” (NSU) set off a nail bomb in the middle of Keupstraße in Cologne. Twenty-two were injured, four of whom critically, and a subsequent investigation by the Federal Criminal Police Office revealed the device could well have injured dozens more. However, the authorities ruled out right-wing extremist responsibility for the attack for years. Later, when the NSU was unmasked, it became clear that they were not only responsible for the Cologne bombing, but also a brutal series of ten murders across Germany. In cooperation with the organization “Mut gegen rechte Gewalt” – “Courage against Rightist Violence” – the Foundation organizes a ten-year anniversary event in Cologne to commemorate the victims of the attack. Over 150,000 converge on Cologne’s Mühlheim neighborhood, in which the bombing took place. The Foundation simultaneously publishes the book “From Fall of the Wall to Nail Bomb.”

April 2013 The Foundation takes its English-language exhibit, ''Germany after 1945: A society confronts racism, anti-Semitism and neo-Nazism'' to New York. Baruch College hosts an evening event featuring the exhibit and a panel discussion.

August 2012 The German Parliament calls for the strengthening of all democratic groups against right-wing extremism, anti-immigrant groups and anti-Semitism, following the uncovering of a decade-long murder spree carried out by the National Socialist Underground (NSU), a German neo-Nazi terror cell. The Amadeu Antonio Foundation responds with its report, ''The Cartel of Apologists: How German authorities systematically trivialize everyday right-wing terrorism''. 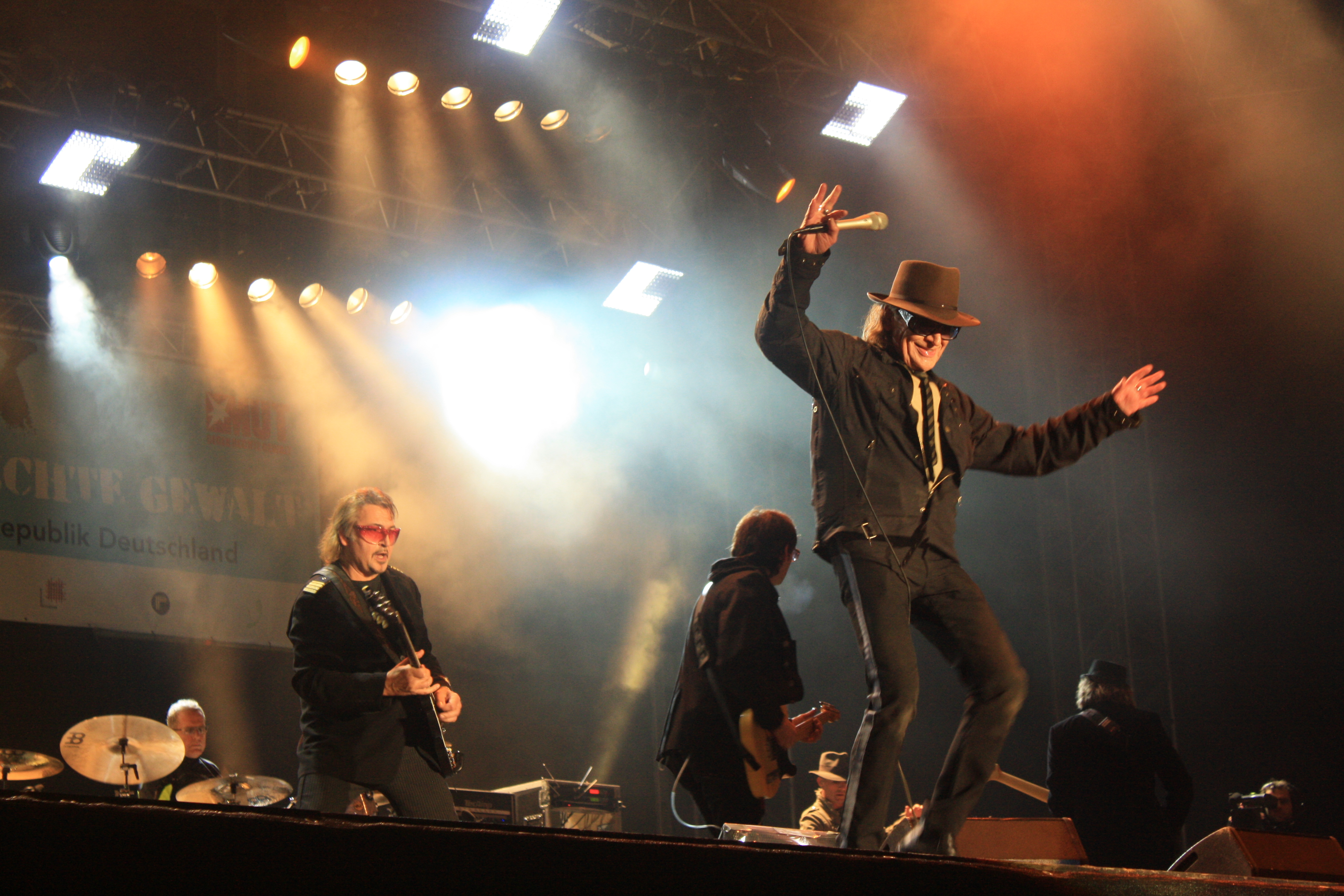 December 2011 The concert, Rock gegen Rechts, in the city of Jena is attended by 50,000 people as a response to the uncovering of the NSU terror cell. German musicians Udo Lindenberg and Peter Maffay perform.

October 2010 With the help of more than 60 social networks, the Foundation begins soziale-netzwerke-gegen-nazis.de as a means of addressing hate speech online. Within a half-year, more than 600,000 people are active members and no-nazi.net is born. 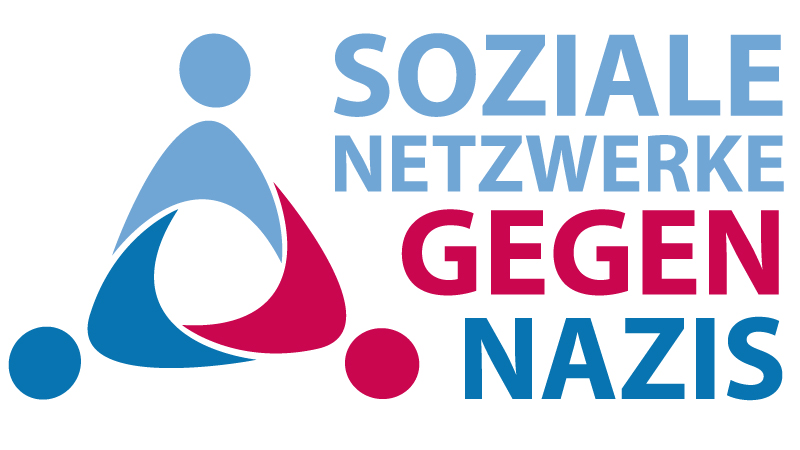 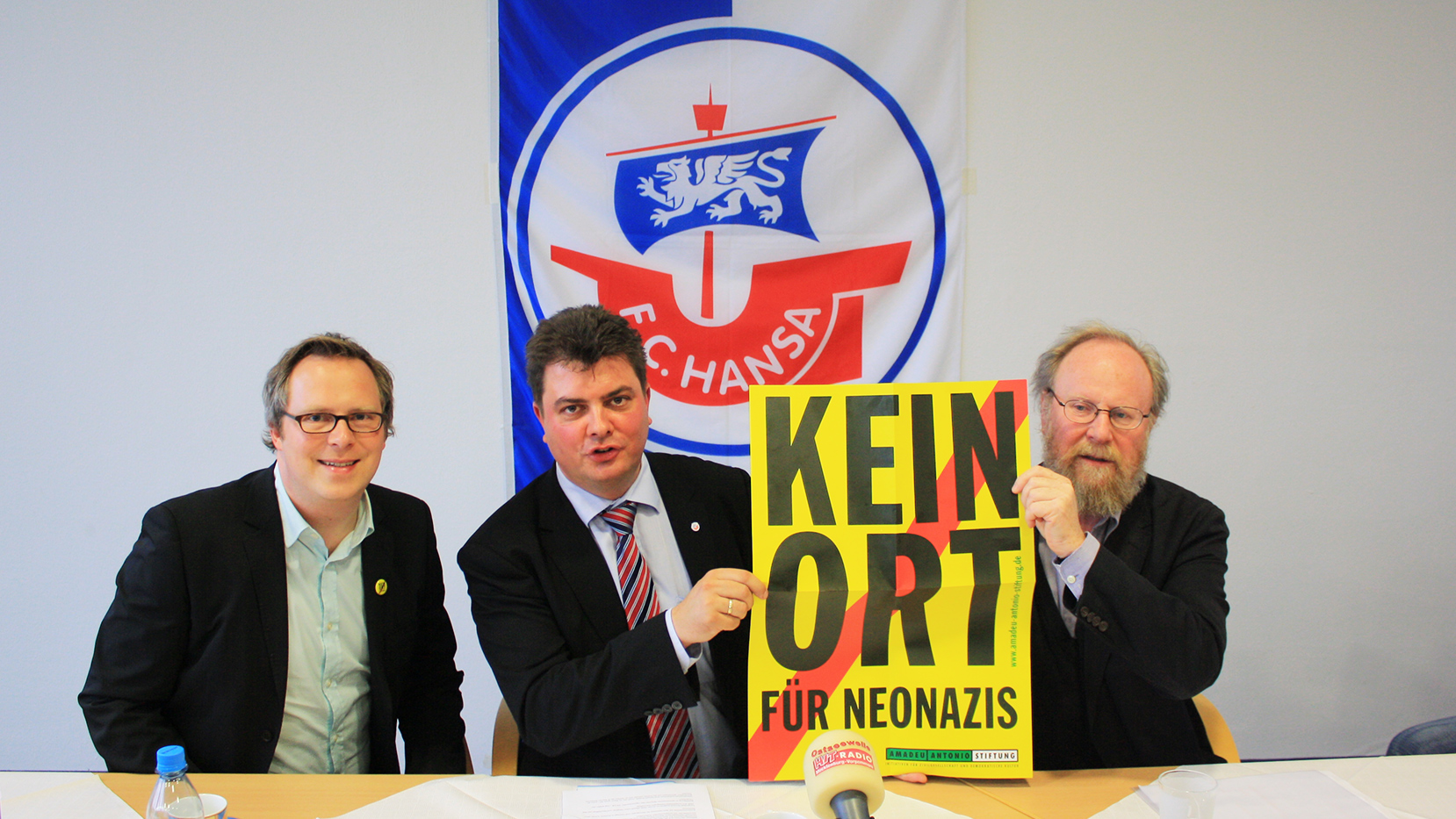 August 2009 The Foundation begins ''No Place for Nazis'' in advance of national elections to raise awareness of right-wing parties in German parliaments. Beginning the campaign in the federal state of Thüringen, the work expands to Sachsen-Anhalt and Mecklenburg-Vorpommern by 2011.

November 2008 Heeding Germany's Central Council of Jew's warning about growing anti-Semitism, the Foundation organizes an exhibit, ''Anti-Semitism in the DDR'', which goes to more than 250 places. ''Action Week Against Anti-Semitism'' is also created, resulting in 160 civil society initiatives and 250 events nationwide.

April 2007 In cooperation with the Cultural Foundation of Dresden, the Bank of Dresden, Dresden's Church of our Lady and the Freudenberg Foundation, the Amadeu Antonio Foundation offers the first Saxony Award for Democracy. The prizes go to projects and initiatives advocating human and minority rights, local democracy, and working against right-wing extremism, racism or anti-Semitism.

November 2006  The Amadeu Antonio Foundation, in cooperation with "Blick nach Rechts" (A look to the Right), oversees the Federal Authority for Civic Education’s new internet project, bpb.de/rechtsextremismus. This information portal updates the public on neo-Nazi violence.

September 2005 In cooperation with the campaign “Laut Gegen Nazis”—“Loudly Against Nazis”—the Foundation starts a series of concerts against right-wing violence, for the first time featuring locations in former West Germany.  An audiobook version is created to accompany the concert tour, featuring texts from prominent authors and patrons such as Johannes B. Kerner and Peter Lohmeyer. 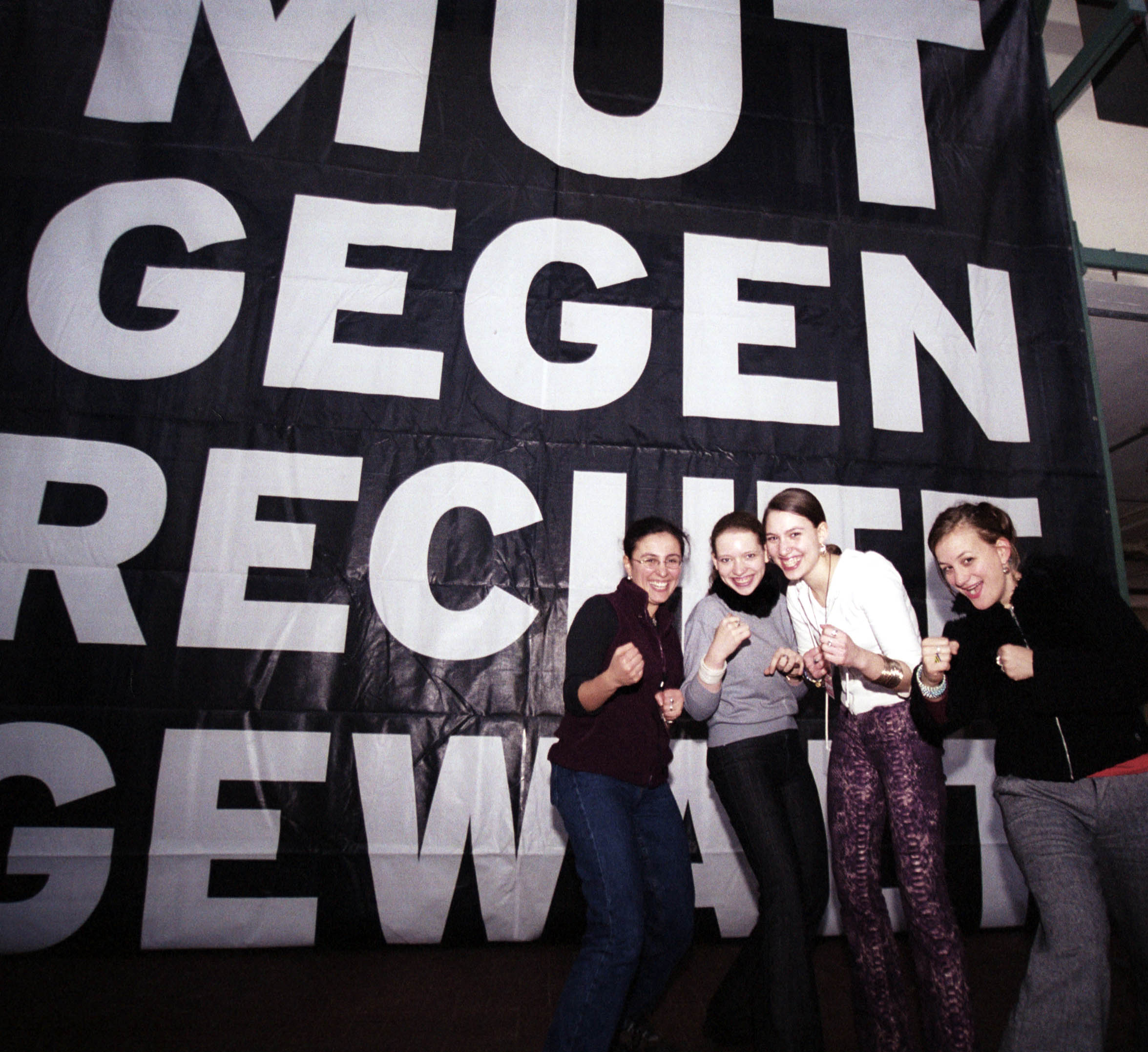 April 2003 mut-gegen-rechte-gewalt.de is started by the Foundation and stern.

February 2003 With the support of the AAF, the Barnim-Uckermark Community Foundation is created in Brandenburg. This community organization is the first of its kind in former East Germany with the support of democratic culture as an explicit part of its constitution. 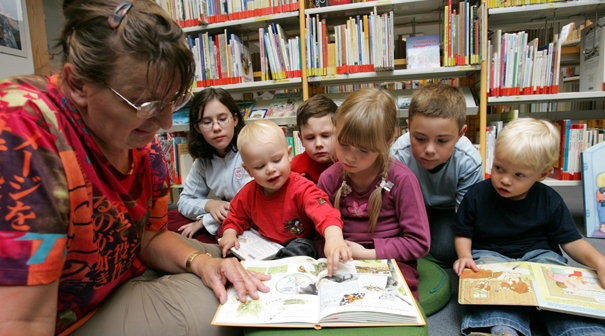 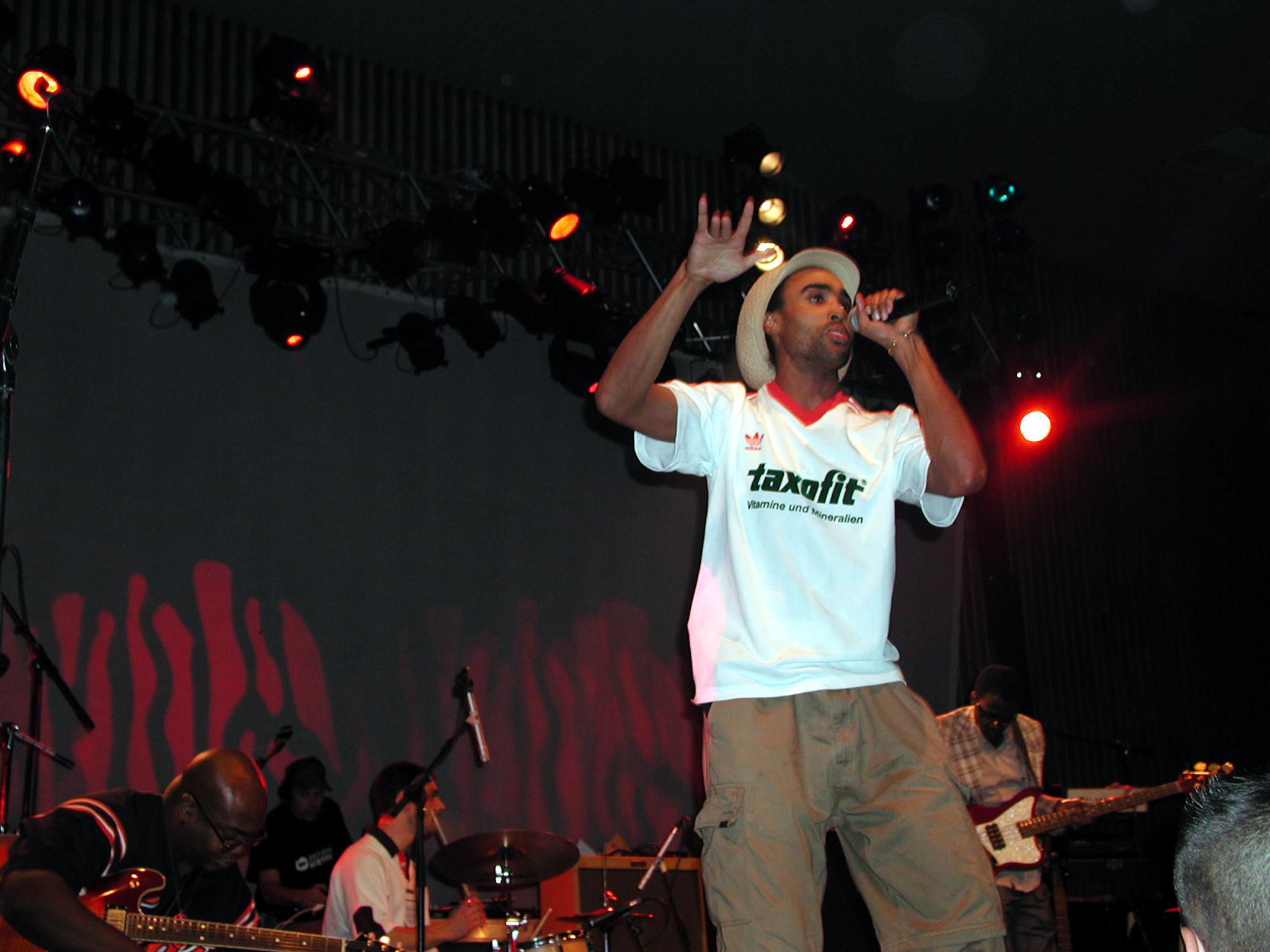 Early 2002 The Foundation organizes school tours throughout former East Germany by Brothers Keepers, an afro-German music collective.  Throughout the tour, members of the group meet with school classes to discuss everyday racism and rightist violence.

July 2001 In collaboration with the national weekly, Die ZEIT, the Foundation begins a fundraiser to establish the Network for Democratic Culture. With the goal of buying a ''democracy'' house in the city of Wurzen, "Die ZEIT" readers donate 20,000 euros and the Foundation puts in an additional 51,000 euros. The house is bought in November 2002 and opens in 2006. 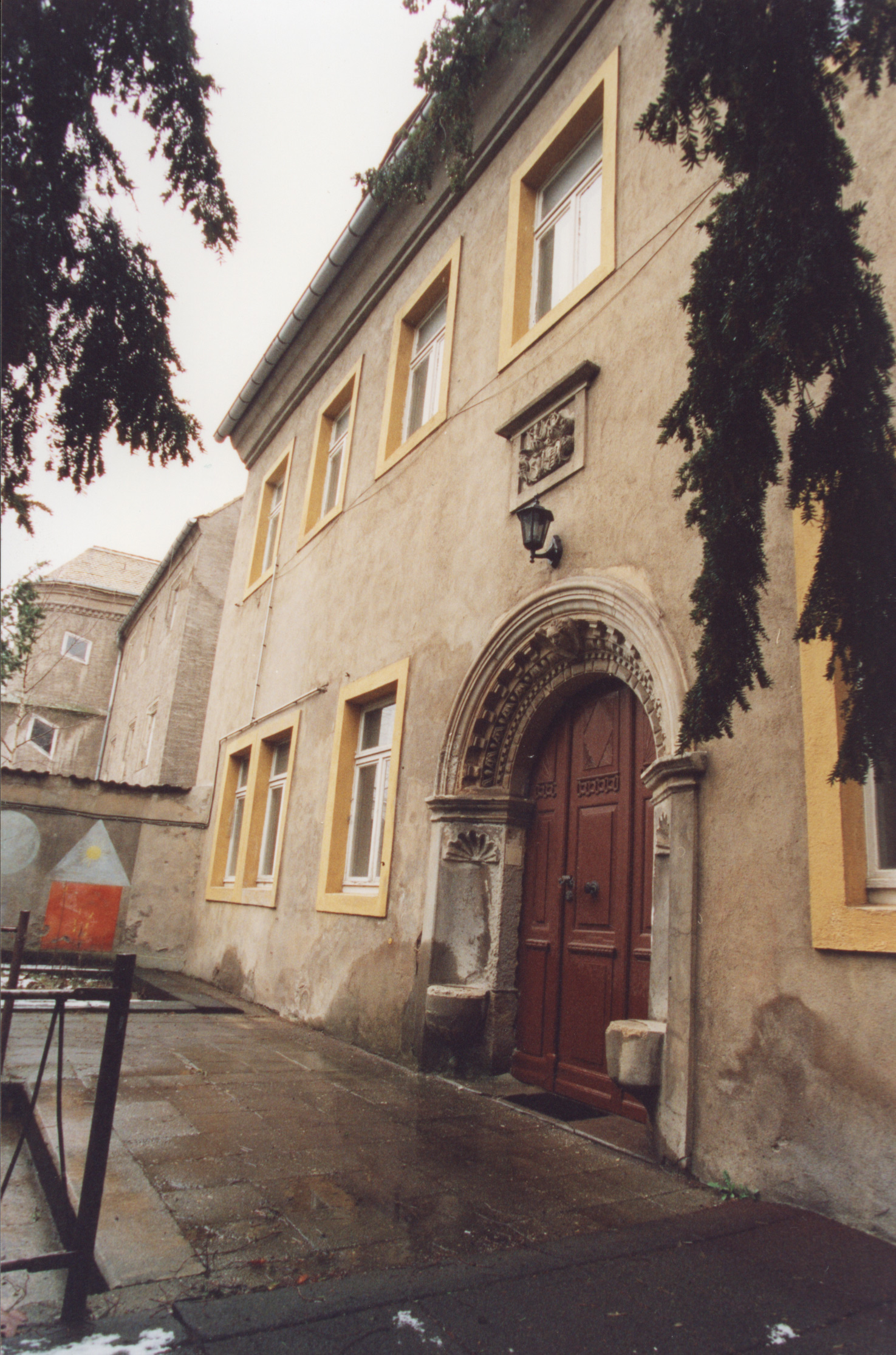 Autumn 2000 Together with the Center for Democratic Culture and the movement, “Courage Against neo-Nazi violence”, the Foundation develops the innovative EXIT program for those who want to leave the neo-Nazi scene.

Summer 2000 The Foundation successfully lobbies for the establishment of a federal program to combat neo-Nazi hate groups, an idea supported by the Berlin legislature. The result is CIVITAS: Initiative against right-wing extremism in the former East Germany. Its implementation in 2001 marks the beginning of a five-year program between the Foundation for Democratic Youth and the Amadeu Antonio Foundation. 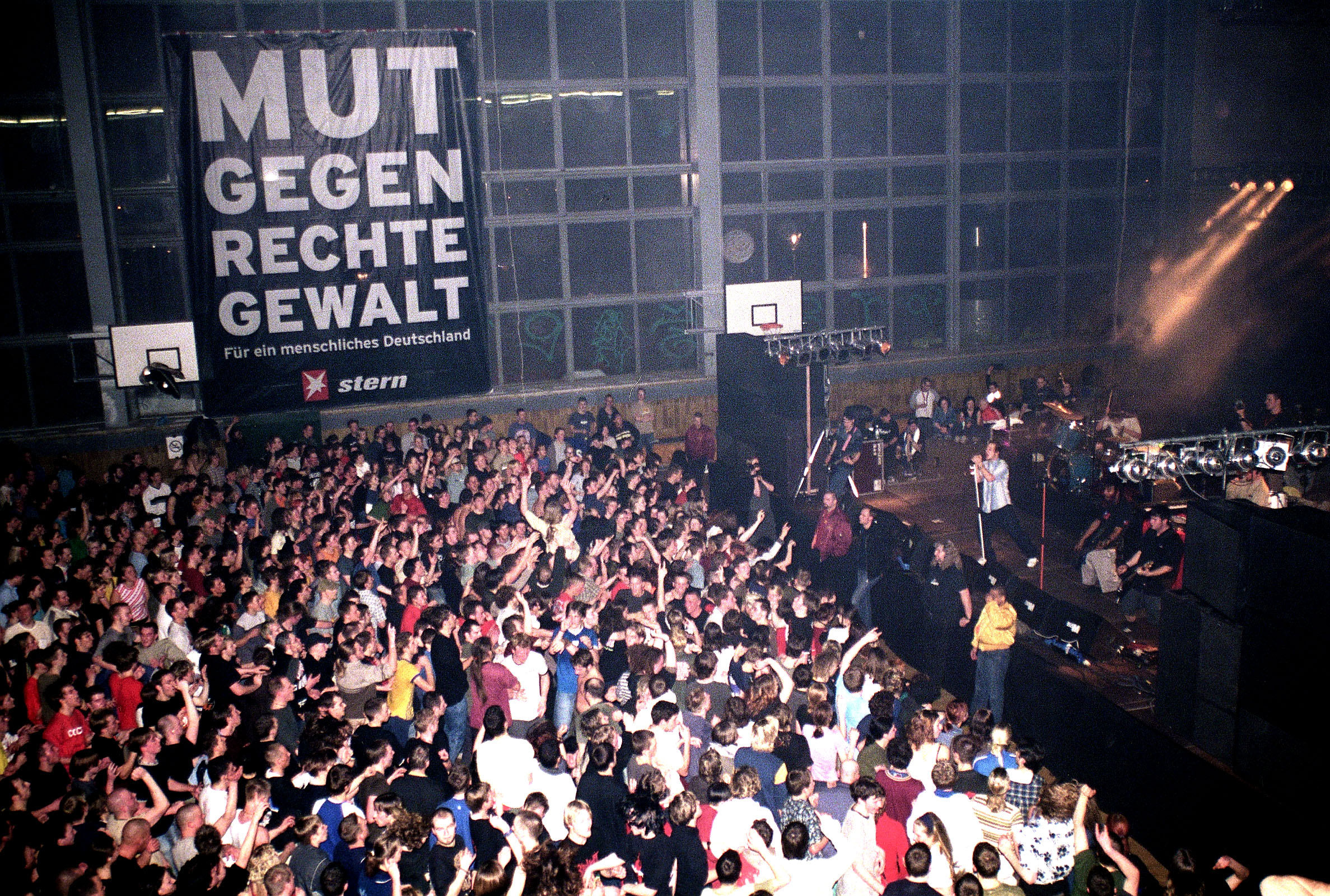 Early 2000 Monika Kruse, a prominent Berlin DJ and producer, founds the initiative „No Historical Backspin“. She, alongside many of her colleagues in the house and techno scene, pledges to donate all proceeds to the Amadeu Antonio Foundation’s CURA fund, which financially supports victims of right-wing and racist violence. 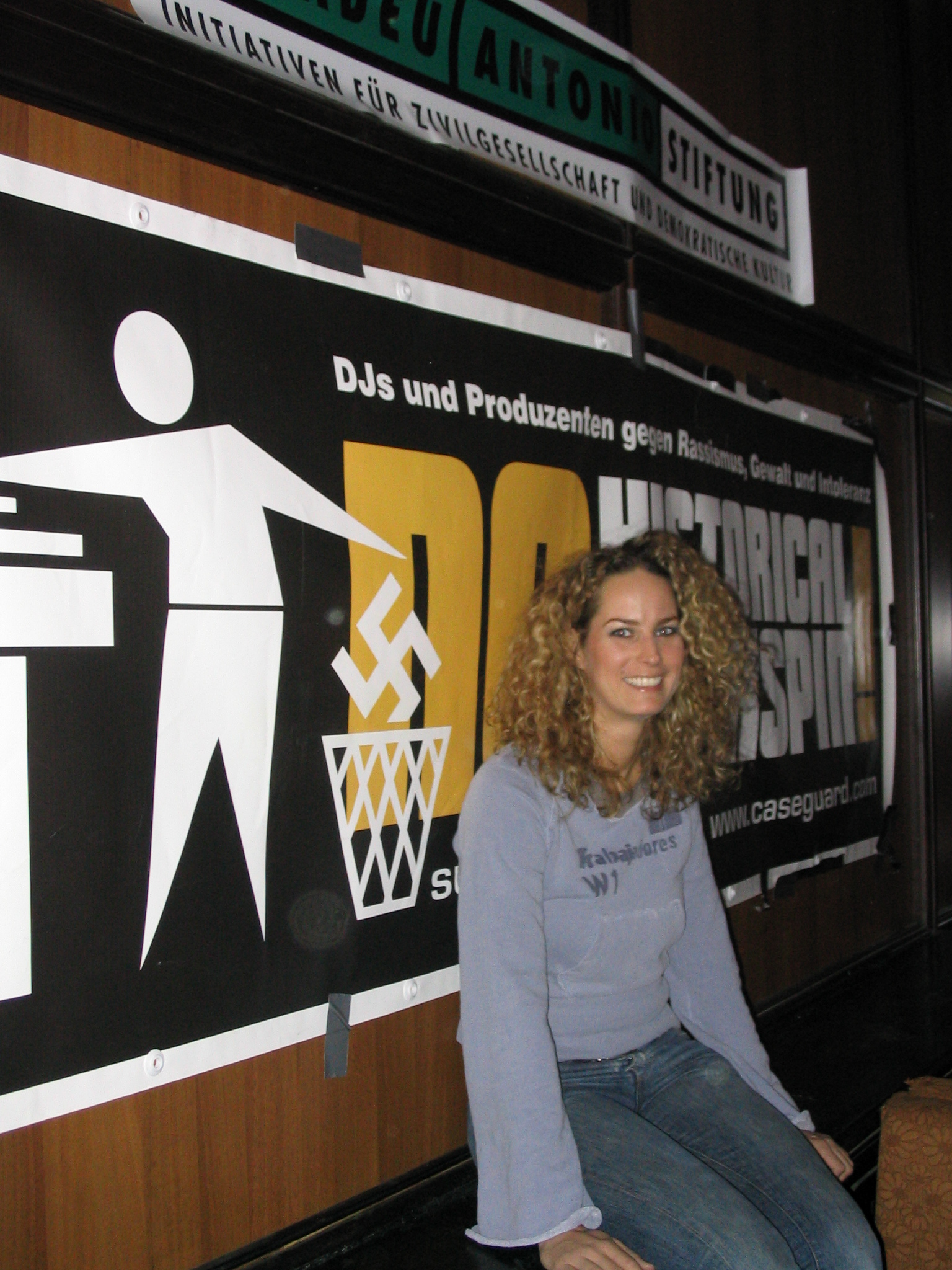 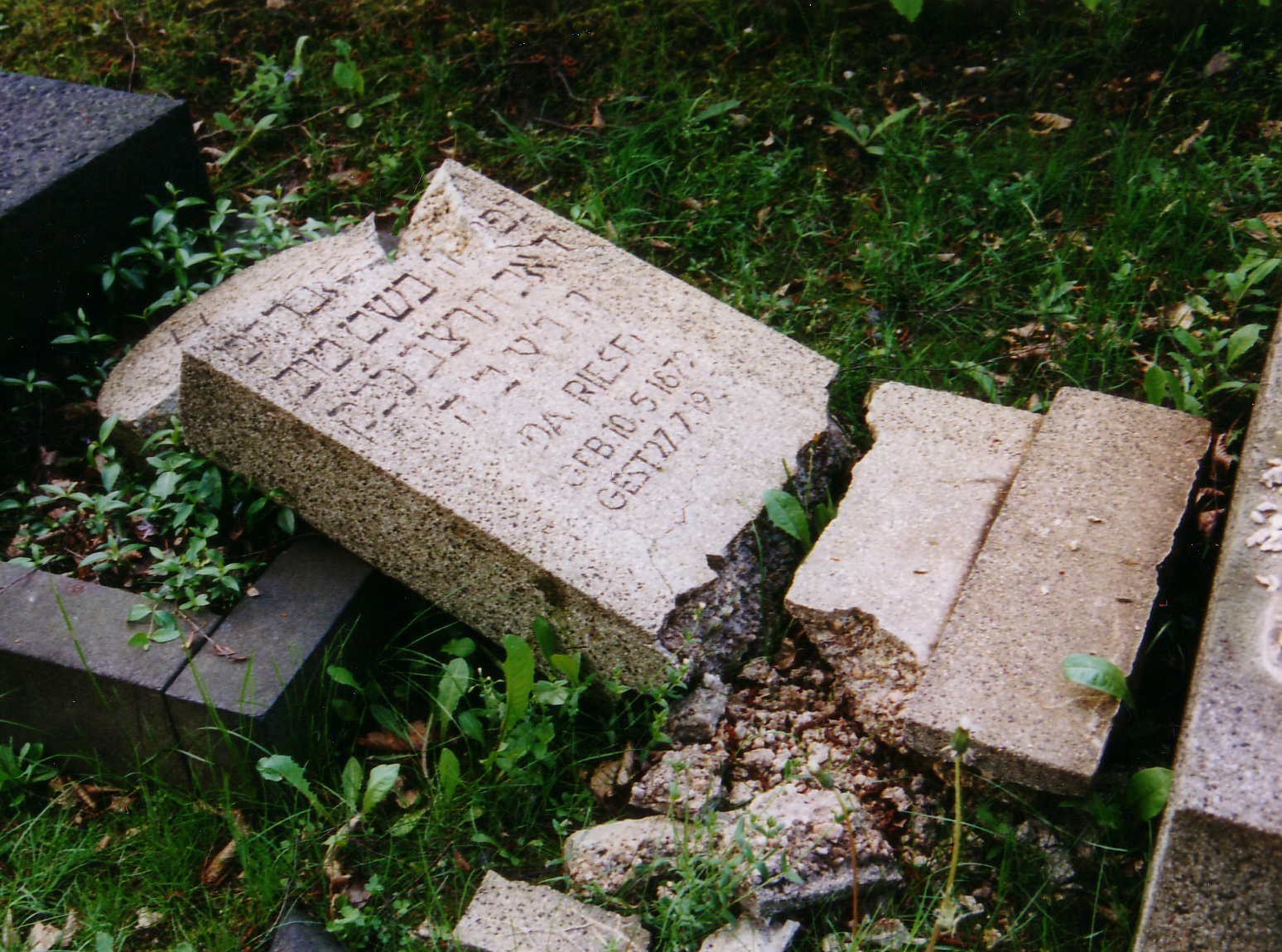 December 1999 A stonemason's business was attacked after he organized the probono restoration of 103 gravestones in the Jewish cemetery of Berlin-Weissensee that had been destroyzed by neo-Nazis. The Foundation's fundraiser raises 60,000 Euros -- enough to repair his propery and establish the Stonemason's Fund for Victims of neo-Nazi Violence. 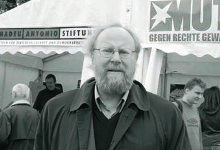