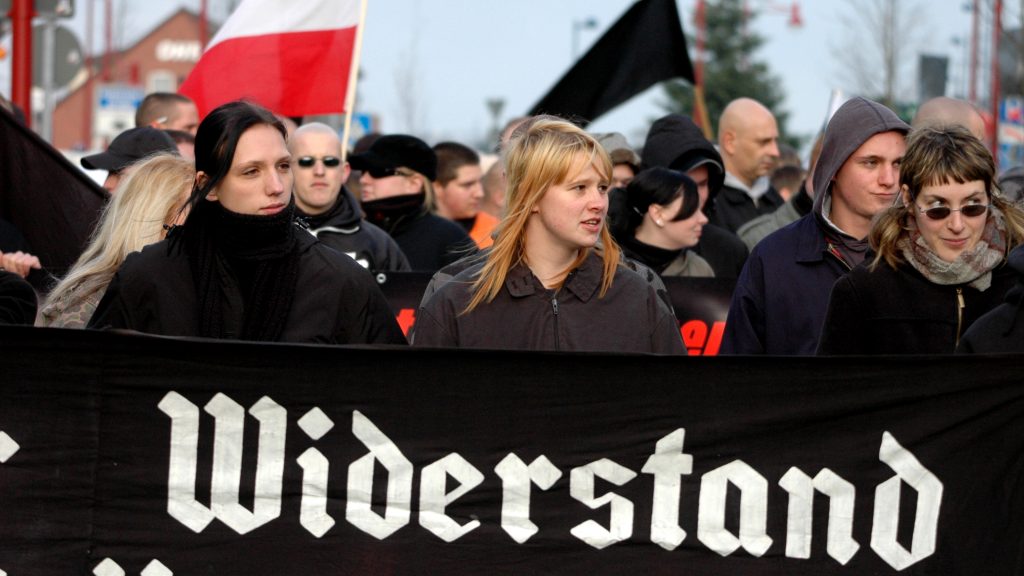 When we think of how to strengthen democratic norms and work against the activities of right-wing extremists, gender rarely comes into the question. That is, women and femininity are rarely considered as part of far-right movements, either in theory or in practice.

Observing today’s anti-neo-Nazi praxis, few (if any) projects confront gender beyond their focus on men and right-wing extremism’s interplay with masculinity. When we say “neo-Nazi”, we often imagine a man with violent tendencies, shaved head and jackboots. Most projects aimed at young people—that is, young men—concern themselves with this archetype. This approach, however, is lacking in two important ways.

First, projects aimed at men or boys frequently neglect to confront toxic masculinity as a structure. They recognize that men and boys feel insecure in their masculinity, and that far-right groups often prey on that insecurity, but their responses to this threat rarely call traditional masculine norms—which underlie so much reactionary thought—into question. Projects holding boxing lessons for boys to build their self-confidence are admirable, but such projects avoid the question of why men must be able to fight to be “real men.”

Perhaps even more importantly, modern anti-neo-Nazi projects often neglect women’s roles in the movement entirely. Though far-right ideologies embody hyper-patriarchal gender roles, generally attracting men more than women, there are certainly women who also support such “traditional values”—and of course, women are just as capable of racism as men. The very real contributions of women to far-right movements, and the dangers these women represent, are often overlooked.

Gaps in the Literature

Surprisingly, women’s roles in the far right are just as neglected in theory as in practice. The connections between toxic masculinity and right-wing ideals have been consistently researched for decades, but connections between femininity and neo-Nazism remain in contrast unexplored. This is despite the very real part that women play in building neo-Nazi circles and maintaining gender roles in Volk-communities. We believe there is a serious lack of research into “right-wing femininity”, so to speak, and how it can be confronted at a pedagogical level.

With the foundation of a “Center for Gender and Right-Wing Extremism” at the Foundation, we hope to develop and implement concepts for real-world projects. We also hope to motivate further research on the subject and develop a network of sociologists, political scientists, and other academics to whose research the subject pertains.