I want to help with a donation
German version of the website...

In Berlin, many people lead their daily lives under the threat of racist, anti-Semitic, homophobic and other forms of hate violence. This is often omitted from the image of a cosmopolitan and tolerant capital, and any discussion of right-wing violence is often limited to East Germany.

With our campaign, we draw attention to the perspective of those affected by such violence in Berlin and call for solidarity with them. In addition to raising awareness of the issue, the campaign aims to collect donations for the CURA Victim’s Fund to support these people.

With its donations, the CURA Victims' Fund supports victims of hate violence by providing swift and unbureaucratic financial assistance. In co-operation with victim advice centres and victim initiatives, the CURA Victims' Fund provides assistance that is adapted to the specific needs of the victims. For example, treatment, relocation and legal costs or the reimbursement of urgently needed destroyed property are covered. The support provided by CURA is independent of the often-inadequate recognition of the crimes by the police and judiciary, which often does not do justice to the reality faced by those affected.

For such people, the help provided by CURA also means valuable moral support and social recognition of their situation. These can be fundamental when it comes to processing the traumatic experiences and regaining confidence in society.

The motifs and their backgrounds

The feeling of threat caused by right-wing attacks has an effect not only on those directly affected by physical violence, but also restricts many Berliners on a daily basis. As so-called “message acts”, right-wing acts of violence send a message to whole groups of people. With a view to drawing attention to the perspective of those affected around the city and its various locations, the current campaign picks up on a range of typical Berlin images. Here you will find information about the motifs and their backgrounds. 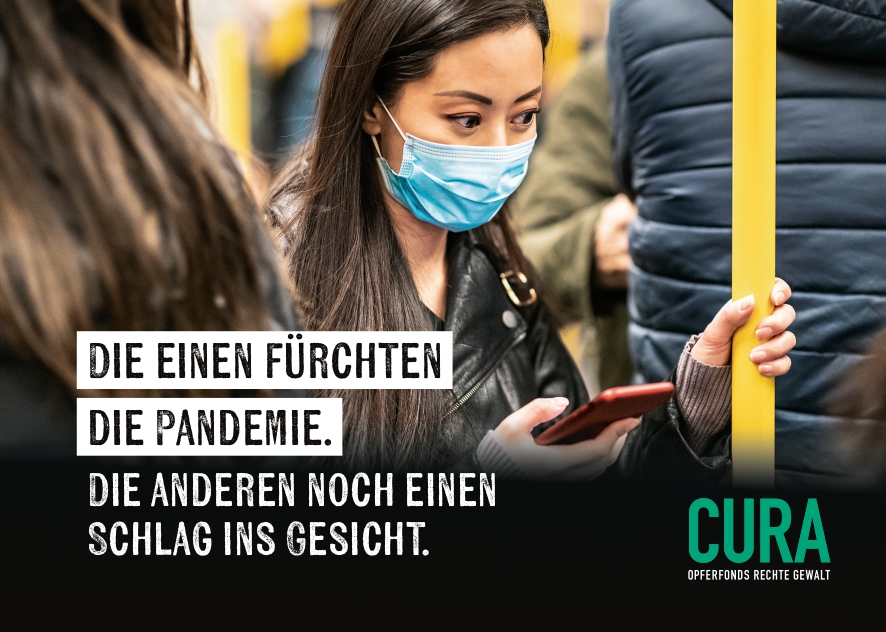 The coronavirus worries us all - for people perceived as Asian, there is the fear of racial violence added. Anti-Asian racism is an old phenomenon that rose sharply with the onset of the pandemic. Hostilities, threats and physical attacks reached new levels. 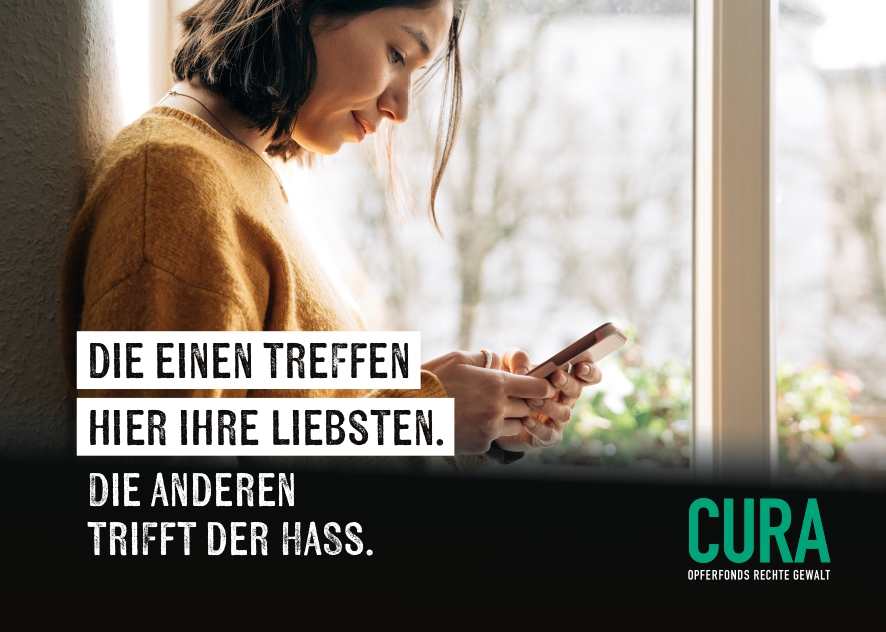 Digital spaces are becoming increasingly important for social exchange, especially in the pandemic - for those affected by inhuman attitudes, digital spaces are also associated with insults, hostility and threats. 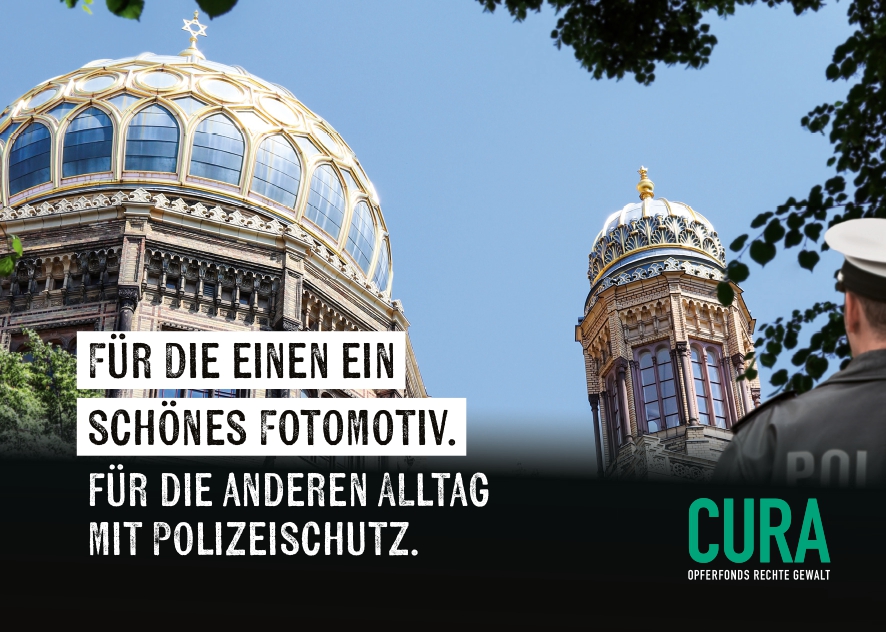 Many Jewish institutions are only safe thanks to police protection – even in Berlin. Whether at the synagogue, in school or at a restaurant, the everyday life of many Jewish people is accompanied by a sense of constant danger. 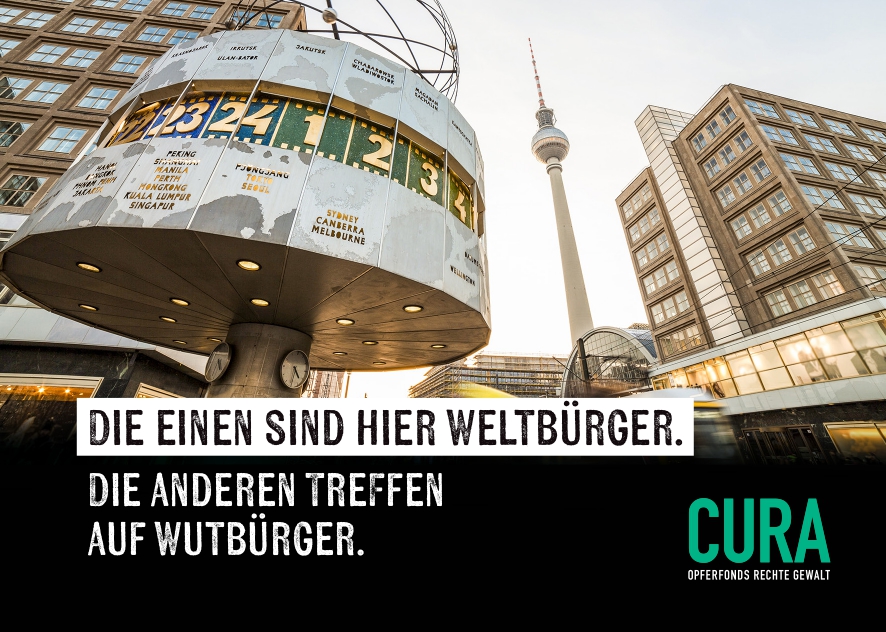 Berlin is cosmopolitan and international; a place where you can truly be a citizen of the world. Many people affected by racism report a very different experience and are confronted with insults, hostility and even physical attacks on a daily basis. 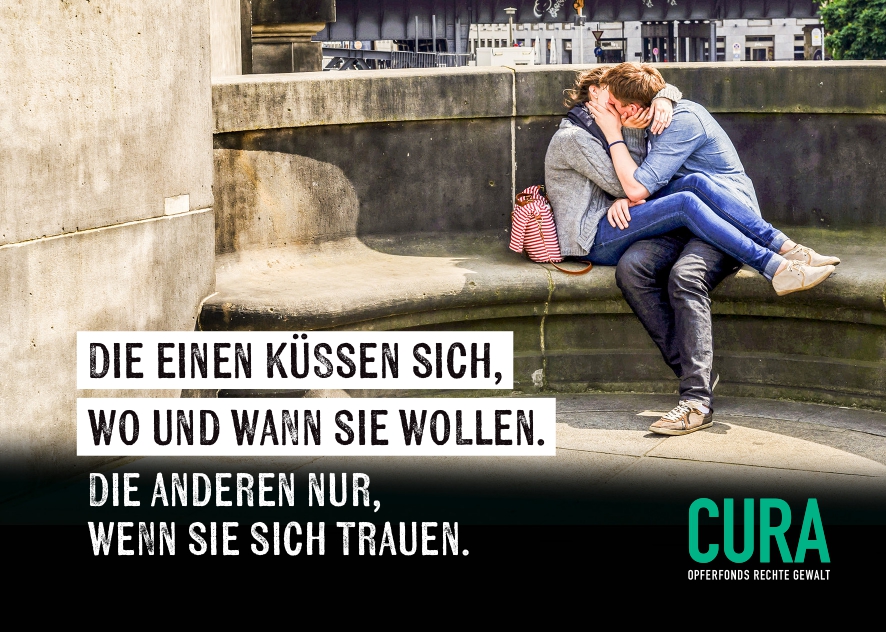 For homosexuals and transsexuals, acts of public affection can be dangerous, even in Berlin. For many people, touching or kissing one another on the street is associated with a fear of being assaulted. 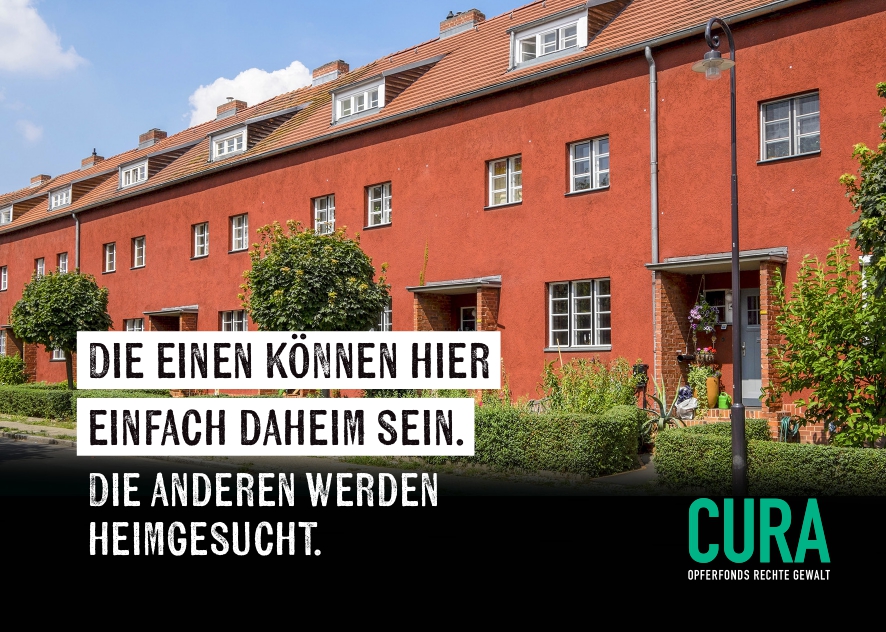 People who are take a stance against right-wing agitation often no longer feel safe at home in Berlin. Broken windows, burning cars, threatening letters – this is the sad reality for many people. 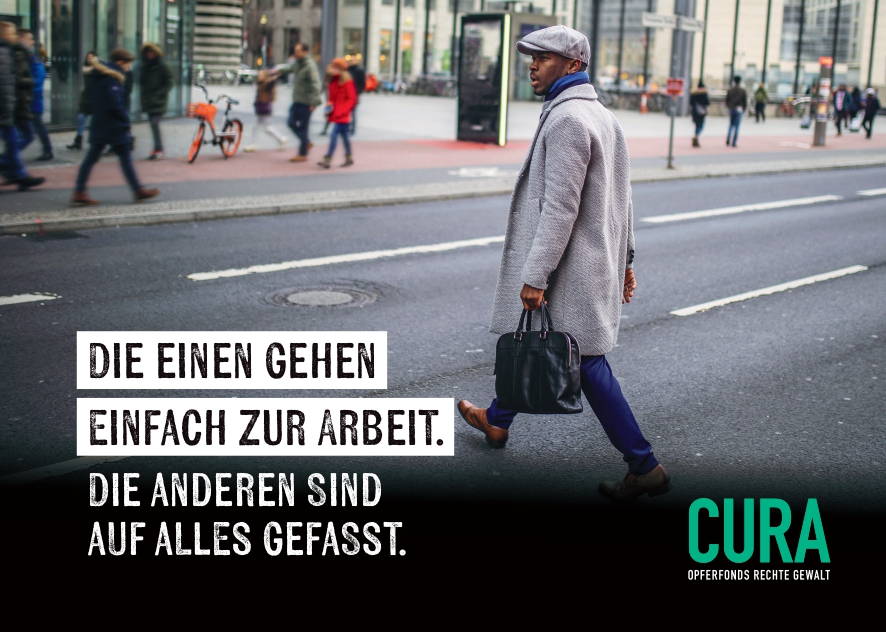 Whether wearing sweatpants or business attire, in the supermarket or on the street, many black people in Berlin experience hostile looks, insults and often even violence on a daily basis. 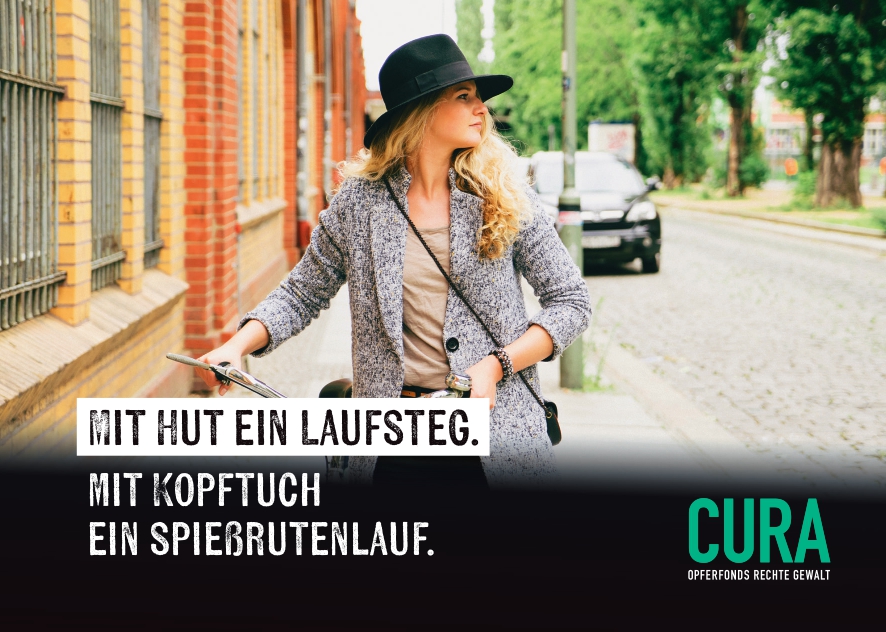 In Berlin everyone can wear whatever they want – except a headscarf. Such is the experience of the many Muslim women who have been insulted, spat at or even attacked in the street. 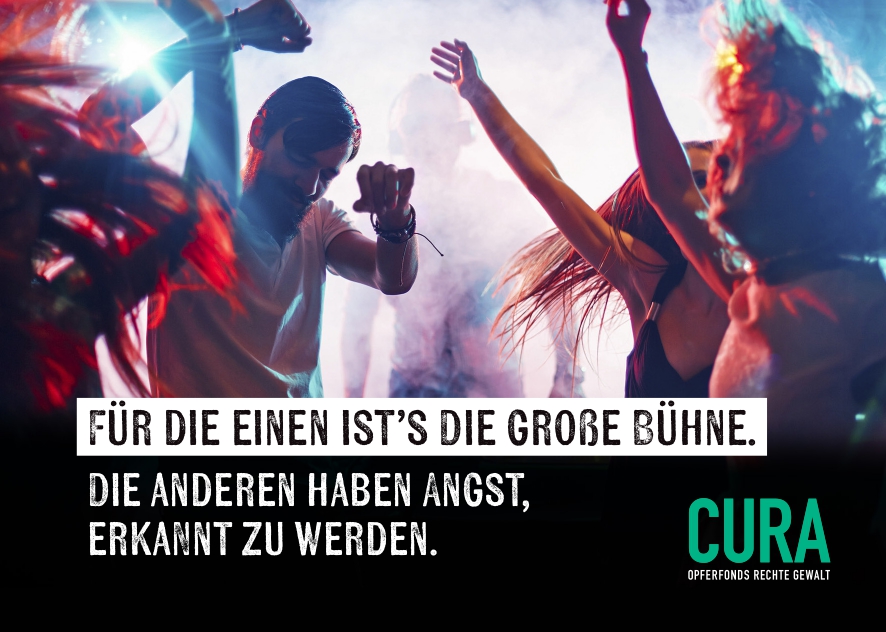 Enjoying Berlin's boundless nightlife, getting to know people or just being themselves at a party is often a painful experience for many Romani and Sinti people. Many often prefer to keep their identity to themselves. 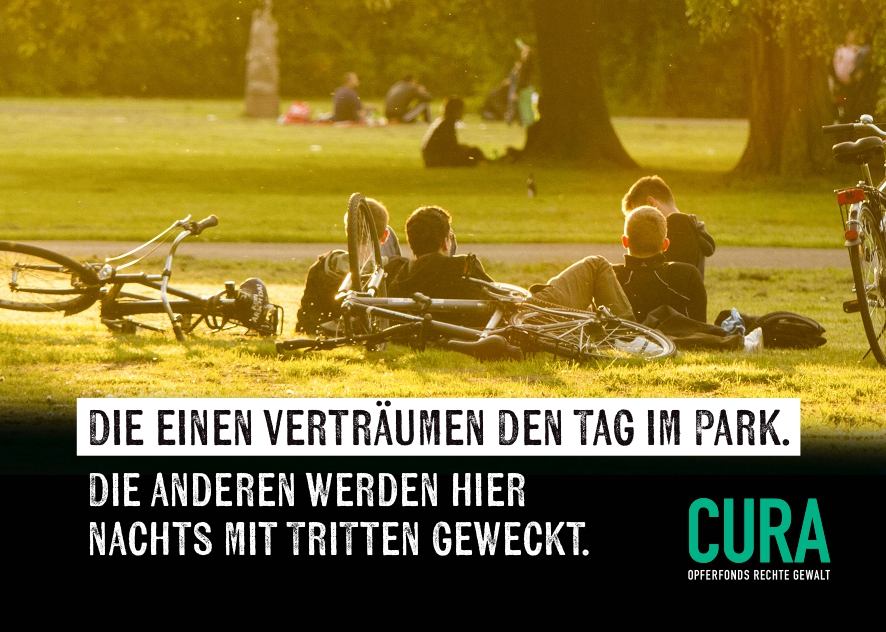 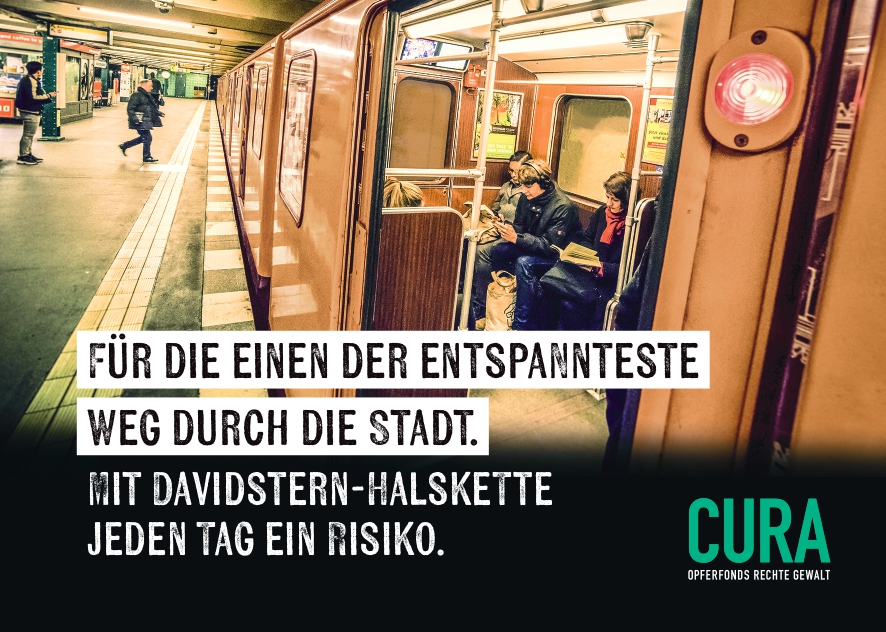 Even in Berlin, Jews can often only live safely by avoiding being recognised. Out of a fear of being attacked, actions such as reading the “Jüdische Allgemeine Zeitung” in public, or wearing religious jewellery or a kippah are simply not a matter of course for many people.

The Project Advisory Board 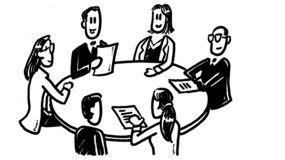 The “Berlin stands shoulder to shoulder with the victims of right-wing violence” campaign is supported by representatives of victims and other committed Berliners from the worlds of business, sports, politics and administration. Information can be found here on the composition of the advisory board. 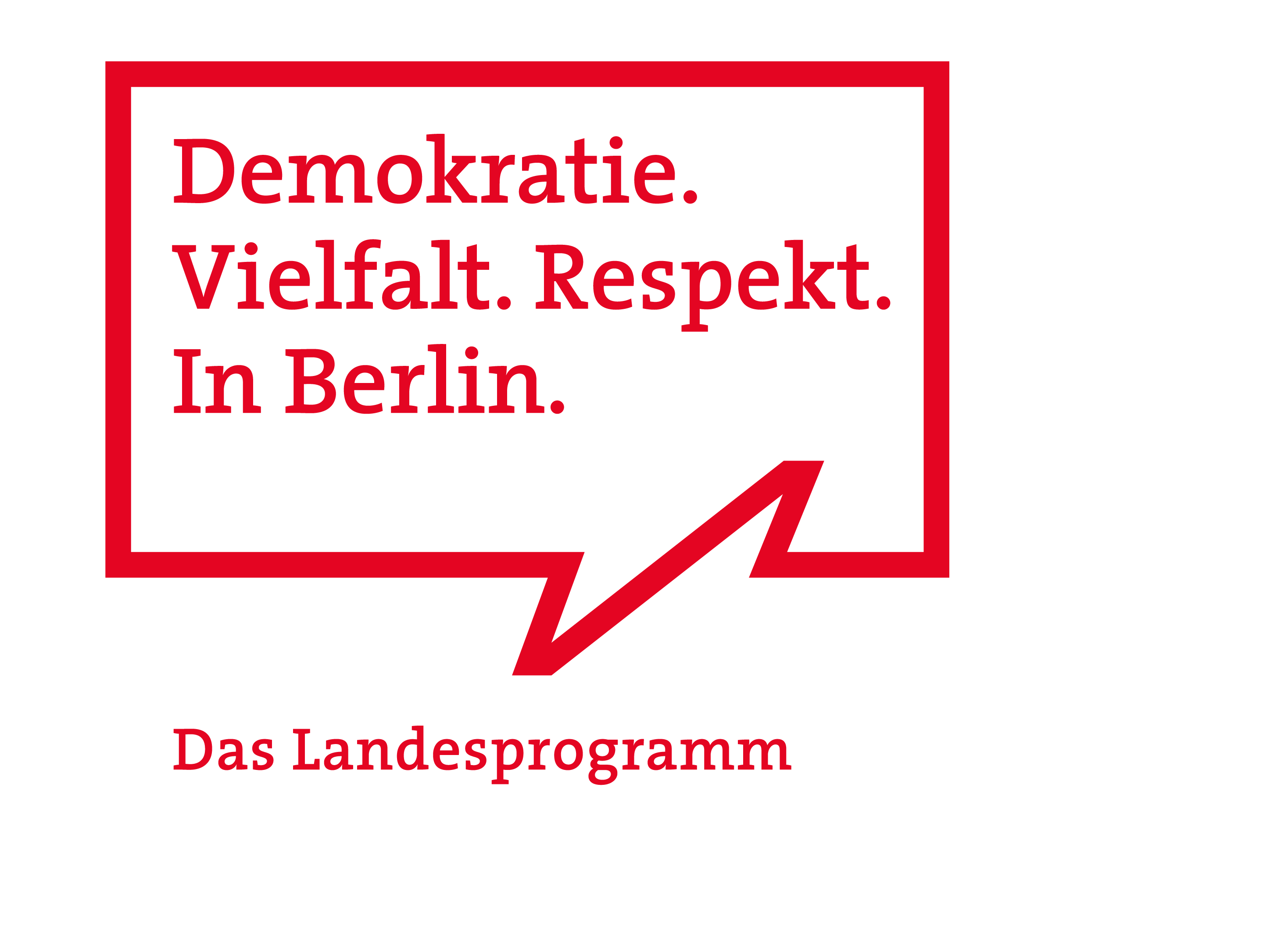