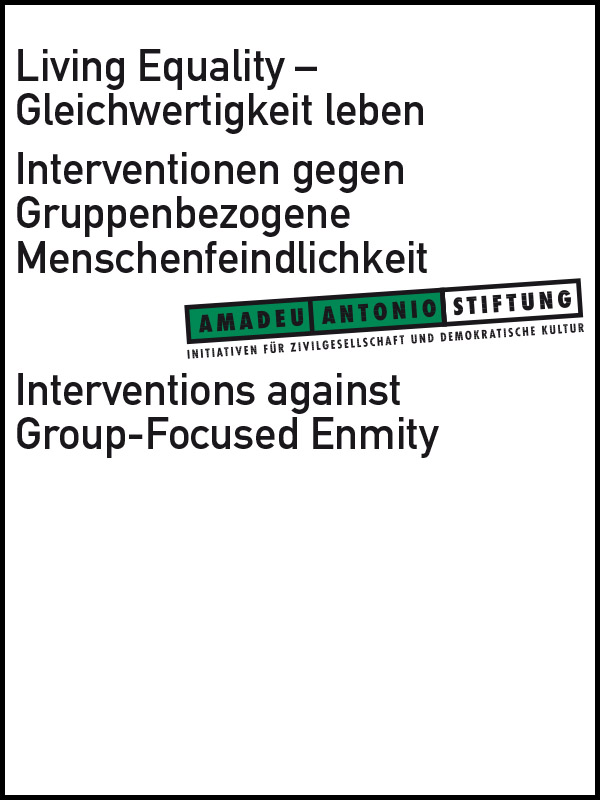 For ten years the Amadeu Antonio Foundation has, with much success, fought right-wing extremist violence. It has promoted and encouraged numerous successful initiatives and projects that have pointed out the the dangers of the assimilation of Neo-nazi ideology into everyday life. Neo-nazis have managed to arouse their communities and mobilize local citizens into action. Despite these events, the question for us has long been how we can, through our work, prevent right wing extremism and hate crimes. We not only target Neo-nazi violence but also combat prejudices and ideologies of inequality such as racism, anti-Semitism, sexism, homophobia, and hostility toward the homeless and disabled that occur in the majority of the population. Answers to the question of combatting right wing extremism and some examples of our projects appear in an article in our new brochure: “Living Equality—Interventions Against Group-focused Enmity.”

We continue to experience the fact that we actually know little about the successful prevention of right wing extremism and the necessary culture of change. After discussions about how the foundation can further work on these areas we have focused on “Deutsche Zustände” (German Phases), a long-term study from the Bielefeld Institute for Interdiscipliniary Research of Conflicts and Violence. In the study, Professor Wilhelm Heitmeyer’s team discusses a question that has been suppressed and seldom discussed by many people: What is the degree of hostility in German society toward ethnic and social minorities? The research team describes this hostile attitude as “group-focused enmity.” Academic work like this study normally only reaches a panal audience. Because of this the Amadeu Antonio Foundation has tried to make the knowledge from the study useful for carrying out projects and initiatives.

To that end, the foundation has established established the project “Living Equality—Gleichwertigkeit leben” with the help of several long-standing partners including the Federal Working Group of Regional Jobs for Democracy, Youth-Oriented Work, and Schools; the Center of Democratic Culture; the State Association of Sinti and Roma Peoples in Baden-Württemberg; and fifteen other partners. The project was accompanied academically by Professor Andreas Zick from the Bielefeld Institute for Research on Conflicts and Violence and his colleague Dr. Beate Küpper from the University of Dresden. The Amadeu Antonio Foundation received financial and textual support for the program from the Ford Foundation and the Freudenberg Foundation.

All the people involved in the project network agreed to include in their own projects one or more elements that dealt with group-oriented enmity and to develop new methods for for their inclusion. The results of the individual projects were to be discussed at regular intervals in an academic atmosphere in order to develop a frame for intervention against ideologies of inequality. At the center of the basic approaches to intervention stand the principles of equality, participation, integration, recognition, and self-worth. The basic approach targets universal norms such as human rights and covers particular historical and cultural specifics of the shaping of individual elements of group-oriented enmity.

The German-English brochure presents in 64 pages indroductory articles about the topics as well as the results of seven selected projects, arguments with history, schools, and neighborhoods; sports; and the establishment of decision making and responsibility. In total 22 projects were estabilished in the context of Living Equality.